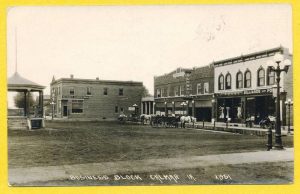 In the early years, South Winn Insurance was operated by Adrian Smith out of the old Iowa State Bank Building in Calmar. Around 1976, Adrian moved the business to 105 S Maryville. This building had previously been occupied by the Post Office, then later People’s Natural Gas. The business was purchased in 1986 by Larry Huinker and Gerald Lynch and incorporated in the name of South Winn Insurance Services Ltd. In 1989, Lauer & Lauer Insurance Agency Ltd. purchased the business and kept the newly incorporated name. An adjacent building that once housed the Home Cafe was remodeled in 1993 to add office space. Mary McEnaney purchased South Winn Insurance Services Ltd. in 2001 and operated the business out of the S Maryville location until 2012. At that time, Mary acquired the building at 118 E Main St in Calmar, which had previously housed businesses such as Bucheit Feed Supply, Bucheit’s Grocery, offices for Area I Vocational-Technical School and the D & D Department Store. The first floor of the building was remodeled into offices, a conference room and break room, providing much needed space for the growing business.